As a playwright, freelance writer, jazz advocate and performance artist I pioneer the cause of local, sustainable art. A full-time freelance writer since 1996, I have written for national and international publications about food, travel and the arts, and was the Dining Critic for Orlando Magazine for 11 years. I've won five Florida Magazine Association "Charlie" Awards for my food writing. I was a regional judge for the James Beard Foundation and a founding member of the Greater Orlando Food Leaders Alliance (goFLA), when I was master of ceremonies for goFLA's public launching event with guest chef Norman Van Aken in 2014.

• With 43 productions and readings of my plays from coast to coast and in three countries since 2001, I continue to explore new environments for theater. In 2012 I was awarded a United Arts Professional Development Grant to create the groundbreaking House Theater Project series of live-streamed original theater works, and completed a successful Kickstarter campaign to launch the year-long 13in13 Project, independently producing 13 artistic events, in 13 different locations, in one year.

• My live collaborations include spoken-word performances with renown composer and author David Amram; with jazz trumpeter Brian Groder at the legendary Jazz Gallery in New York and the Digital Media Arts Center in Orlando; with jazz ensemble La Lucha at the renowned Timucua White House; and for the Orlando International Fringe Festival.

• As the Chair of the Word Play alternative programming stream for The Timucua Arts Foundation, I've presented a diverse series of events, including theater, live video, film; spoken word and poetry; and five World Premieres of my plays. In 2019, I was chosen as the only independent producer to participate in an artisitic partnership with the Orlando Science Center for their 2020 exhibit, Pompeii: The Immortal City, with a series of discussions, demonstrations and dinner called Pompeii's Table. I have been an Associate Artist in residence at the Atlantic Center for the Arts three times, with Samuel R. Delany, Douglas Coupland and Cornelius Eady.

• As producer of the Jazz On Edge series since 2008, I have spotlighted the best of Central Florida's vibrant and creative jazz scene and showcased more than 60 amazing artists to date, in a wide variety of venues.

Joseph Hayes is one of the new voices that can bring the theater to new audiences. His sense of dialogue and structure, his wit and awareness of the foibles of our society and the humanism that fill the pages of his work make him a true dramatist." — David Amram

"If you follow the arc of the output of writer-producer Joseph Reed Hayes, you start to see a pattern of self-imposed challenges built into his work. When the Orlando playwright won a professional development grant from United Arts, the end product wasn’t just a chance to present some hitherto-too-expensive work. The award seeded his first House Theater Project – a play performed in and streamed live from his own domicile – where he “sat and watched people’s faces more than the actors.” The wall between performer and audience had largely melted – with the space between them often just a couple of feet. The game is to look for a hook in Hayes’ ongoing works – some are transparent, some less obvious and seen only through inference. This year the transparent game was his ambitious 13in13 series, in which Hayes posed himself the challenge of presenting 13 events in various disciplines. Though Hayes is known for his interest in jazz – witness his Jazz on Edge series – in his two-actor play Solos, tackling the issue of class and the role of women as creatives throughout jazz history is the less-obvious engine. “I’ve always seen this sort of corollary between theater and jazz, as possibly the only two art forms where improvisation is so crucial to what happens that every show you see is going to be different, merely by the nature of those human interactions,” the playwright says, explaining that signature hook in action." - Orlando Weekly

"A play by Joseph Reed Hayes is a welcome oasis of cultured smarts at the Fringe." - Orlando Weekly

"It takes a particular mindset to be a Renaissance man, someone willing to wear the hats of playwright, music producer, freelance writer, radio personality, spoken-word performer, photographer and self-promoter. All those descriptions would fit Orlando arts advocate Joseph Hayes, who wants to harness what he has learned from his diverse interests into an impressive, ambitious and exciting schedule of 13 cultural events in 2013. Hayes already has built a reputation for indie-minded events. His Jazz On Edge concert series, for instance, is celebrating its fifth anniversary in 2013 as an established forum for highly evolved jazz. His House Theater Project has streamed intimate theatrical productions online to a worldwide audience." - Orlando Sentinel

"An Orlando playwright using smartphones and a computer tablet is at the forefront of a growing movement to harness the power of the Internet to increase participation in the arts. Encouraging new theater patrons is exactly what Hayes hopes his project can do. About 18 patrons will watch two actors perform "A Little Crazy" in Hayes' living room at 8:30 p.m. Sunday, while the rest of the audience experiences the comedy electronically at housetheaterproject.com and on the event's Facebook page." - Orlando Sentinel

“I am thrilled to see a playwright take on the live-streaming mantle. Technology has enabled today's artists, like Joseph, to green-light their own projects and build global audiences for their work rather than sit around and wait for other people to make their dreams come true! At VirtualArts.TV we are committed to reinventing the performing arts for a wired twenty-first century audience and so create new work, new audiences and new revenue streams for artists everywhere. Congratulations Joseph and your cast and crew! I can't wait to see what you do next!” - Kathryn Velvel Jones, CEO/Actor, VirtualArts.TV, “Better Left Unsaid”

“I loved the play, it`s so realistic! I loved to listen the uncle`s memories from his youth! Loved the acting, too! So natural and spontaneous with both actors! What a beautiful idea with this home setting! I was very impressed to hear the klezmer music! Loved the clarinetist`s performance, too!” - Zoe Pasca, Arad, Romania

I'm a food and travel writer, feature writer, theater and music critic and cultural explorer. I am available for feature articles and copywriting work, by contract or on assignment. My other hat is worn in performance spaces, as an award-winning playwright, jazz event producer and advocate for new, original creative work for in-house and online audiences. 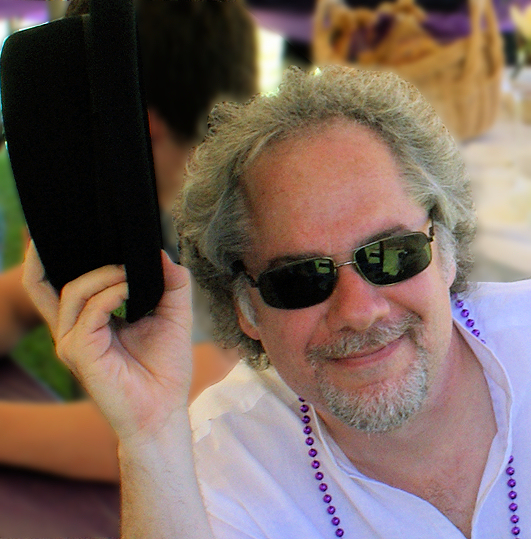 Producer of the Jazz On Edge series, spotlighting new and original jazz from Central Florida since 2008, showcasing the best that Central Florida has to offer in jazz to appreciative audiences, giving creative hometown and nationally-known musicians a place to perform their own music, without boundaries, in person and online. Chair of the Word Play series of alternative programming, Timucua Arts Foundation.